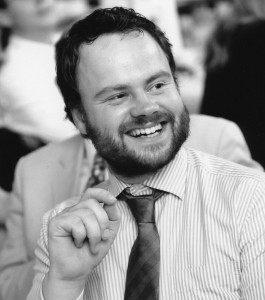 I’m Harold Raitt. I’m 35 years old and live in Kelso, in the Scottish Borders. I also have an office in London, and am there about 5 days in each month. You might also run into me in Edinburgh, Birmingham, Manchester or in a primary or secondary school in Fife, Yorkshire or Devon. Internationally, I’m currently spending a lot of time in Berlin, but also hope to be spending more time in New York in 2016-17.

That was the easy bit; all pretty matter of fact. But, you might ask, “what exactly do you do?” It’s not that I lack an identity, or have an identity crisis, but for a number of years I’ve found it rather difficult to pin down exactly how I should introduce myself.

My quickest answer is now summarised in the tagline and the navigational structure for this website: “Sharing and creating thought through film, theatre, music and books”. But it took a number of years for me to come to that formulation, and there are others that work just as well, or better, in many contexts. If you meet me in an educational setting, I’ll probably introduce myself as the Director of either SeeHearTeach or SeeHearDiscover.

Some of the other ways I describe myself are explored in the blog posts below.

This site uses Akismet to reduce spam. Learn how your comment data is processed.